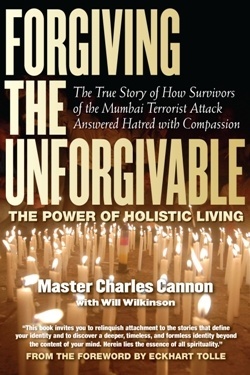 Master Charles Cannon’s Forgiving the Unforgivable tells the inspirational, true story of how survivors of the 2008 Mumbai Terrorist attack forgave their attackers.

The book also provides detailed, user-friendly instructions for learning how to unconditionally forgive others (and yourself), through developing a holistic practice that is simultaneously practical and transformational.

Forgiving the Unforgivable provides you with tips and tools to begin meeting every challenge with love and forgiveness – regardless of what others do. Master Charles Cannon is a leader in the field of modern spirituality, a visionary and pioneer in the evolution of human consciousness. He founded Synchronicity Foundation for Modern Spirituality in 1983 and developed the High-Tech Meditation and Holistic Lifestyle experience which have helped transform the lives of millions worldwide. His speaking engagements include: the United Nations; the World Health Organization; the National Institutes of Health; Columbia, Oxford, Tel Aviv and Bombay Universities; Westminster Abbey and the Vatican.

His primary inspiration occurred during early childhood when the Blessed Mother began appearing to him. He became a close disciple of Paramahansa Muktananda, one of the most acknowledged spiritual masters of our modern era and was ordained as a monk in the Vedic tradition. His monastic name is Swami Vivekananda Saraswati.

Master Charles and Synchronicity associates inspired world audiences in 2008 by expressing love, compassion and forgiveness rather than condemnation towards Islamic terrorists who murdered two and injured four of their group during the Mumbai terrorist attack. In the aftermath of their rescue, they created One Life Alliance, a charitable, educational organization dedicated to honoring the oneness and sacredness of life.