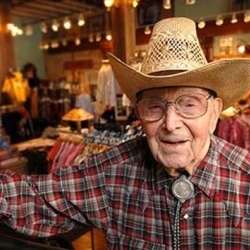 I wrote a story last week about Denver’s Rockmount Ranch Wear. It’s a six-decade business that was started by “Papa” Jack Weil, who joyously ran the company until he was 107. He showed up every day, sat at his little wooden desk in the front of the store and was widely regarded as the world’s oldest CEO.

He wasn’t, as far as I know, a student of metaphysics, but the reason his business was so successful and that his snap-button Western shirts are the go-to shirt for everyone from Eric Clapton and Tom Hanks to Robert Redford and Paul McCartney (he wore not one, but two different Rockmount shirts the night he hosted Saturday Night Live) is because Papa Jack believed the following things.

“It’s not who you are that matters. It’s what your dreams are.”

Papa Jack’s grandson, Steve, runs the business today. He wrote a book called Ask Papa Jack: Wisdom of the World’s Oldest CEO that gives powerful insight into that magical component of always believing in possibilities, in dreams, in what could be. Forget what looks like reality. Dream! That’s where everything comes from anyway.

“The government predicts possible 7 percent unemployment. If it goes to 10 percent, there will still be 90 percent working, consuming, buying.”

“I was always thinking of something new. And I never stopped enjoying myself, not for a minute.”

He nailed it on the head with that one. Love what you do. It’s the door to everything. Enjoy yourself and never STOP enjoying yourself, not for even one split moment.

The reason Ang Lee used Rockmount Shirts in his Oscar-winning Brokeback Mountain (the shirts worn by Heath Ledger and Jake Gyllenhaal are forever entwined and displayed at L.A’s Autry National Center) is because he could feel the love Papa Jack put into all of his products, into creating, into dreaming.

“Every morning I read the obits, and if my name is not there, I get dressed and go to work.”

Papa Jack had a great sense of humor. He believed in making things fun. If it isn’t fun, why bother? That’s the key. Always focus on the fun. Infuse joy and delight into everything you do.

Papa Jack was forever baffled at the popularity of his shirts with such headline-makers as Ronald Reagan, Elvis Presley and even Miley Cyrus. But he was every bit as personable and valued his relationships with every customer, which when it comes to business (and pretty much everything else) is all that really matters.

So yeah, Papa Jack probably never read The Secret or studied the law of attraction, but because of his gut instincts and knowing on a deep, visceral level that relationships, love, joy and creativity are the bottom line, he created a life (and a business) that lives on long after he’s gone. Pam Grout is a hopeless romantic who still believes the world is a beautiful place, that people are noble and that anything is possible.

For a living (and she always wonders why people think that's such an important question), she writes books and articles for such magazines as People, Huffington Post and Travel.CNN. She also enjoy writing stories for her grandkids, but that's more about making a life than a living. She's keenly aware there's a huge difference.

In making a life, she has traveled to all the world's continents, learned 59 ways to make a fort out of sofa cushions, perfected a mean tennis forehand and volunteered at a women's prison and a free health clinic.

Find out more about Pam and her out-of-the-box take on life at her sometimes-updated website at pamgrout.com.