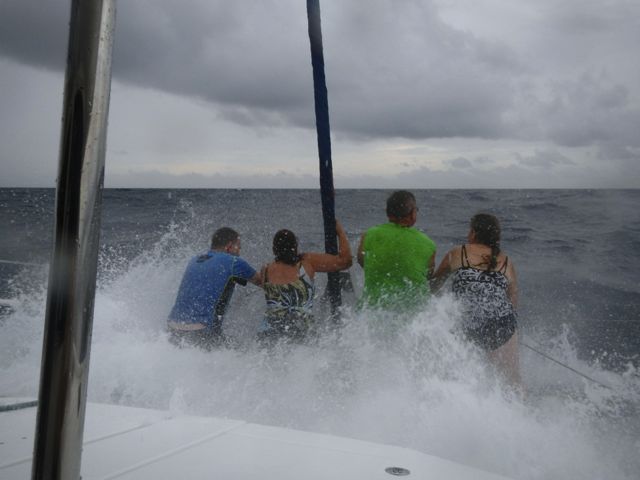 For the last 2 weeks I’ve been sailing the crystal clear waters of the British Virgin Islands. For the first 9 days we had nothing but bright sunshine, clear skies and blue water. Then the rains came, and came and came. It feels like it’s been raining forever- all three days of it.

Yesterday, our crew was disappointed at not being able to go to the beach because of the downpour. We were disheartened with all the things we couldn’t do because of the rain.

Reluctantly, we set our sails for a better place to ride out the storm. As we sailed in the downpour from the island of Anegada to The Bitter End, on Virgin Gorda, my father-in-law decided to be a little bit crazy (which really isn’t all that unusual for him). He went to the bow of the boat- in the rain, and starting “riding” the waves, by standing on the trampoline at the front of our 48’ catamaran, holding onto the lifelines and the jib, and jumping up and down with each wave.

At first we laughed at him. Then I was intrigued. But it was raining! Still, I was tempted to be crazy too. Then, when I could resist no more, I joined him on the bow. With each crest we would raise into the air, only to plummet a second later into the bottom of the trough. Sometimes the bow would rise 20’ above the water, only to splash down into the sea, dousing us with warm seawater from underneath.

Within 15 minutes, one by one, everyone on the boat joined in the fun.

Without the storm we wouldn’t have had the strong winds or the high surf, which made our new sport “wave riding” possible. Had it been sunny and beautiful, we would have missed one of the greatest thrills I’ve ever experienced in 25 years of sailing in the Caribbean.

Would it have been fun to go to the sunny beach? Sure, it would have. But, when life gave us lemons in the form of a storm, we made lemonade. I’m grateful to my father-in-law for his positive attitude, for being so playful and for inspiring all of us to join him.

In this experience, I was reminded that life doesn’t always give us what we want- sometimes it gives us even better things- even when it doesn’t look that way initially.

So, the next time there’s a storm in your world, look for a way to ride the waves and I’m guessing the situation will turn for you, just as it did for us.

As I write this, yes, it’s still raining, on day 4. Bah. But, with the right attitude, nothing can stop us from having a great time, not even a little rain.