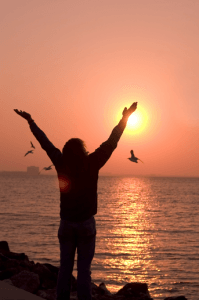 In today’s busy world, the first thing that we seem to neglect is ourselves. There’s only so much time in the day and most times, taking care of exterior responsibilities are more important that taking care of our inner selves. The biggest, untapped opportunity is just waiting for us to pause, connect and listen.

Mother Teresa  took 4 hours EACH and EVERY morning to reconnect before she took a step into the world. Pope John Paul took 3/1-2 hours of quiet time each morning. Yet we bounce out of bed, hop in the shower and we’re ready to tackle the world- unarmed, disconnected and ill-equipped.

The secret is to put your own oxygen mask on first before you try to help someone else. Just as in flying, you can’t help someone else if you’re not ready yourself. If you don’t take care of YOU first, you’ll have less to share with the world. Taking time for you isn’t selfish- it’s the best thing you can do for yourself and for others.

My time in the morning is MY time for a reason, and it’s not a selfish one. MY time for me is when I’m open and available to that greater, unlimited part of myself. It’s when I believe that all things are possible- because nothing stands in my way. It’s when I reaffirm the greatness inside and know that I am a magnificent creation with the power to do, be or create anything.

It’s like I’m plugging in to an energy source that is bigger and far beyond what I can do on my own. By connecting to greater part of me first, it’s like I have an invisible team marching forward in my day, lining things up for me in advance. I don’t know how it works- I just know that it does.

So instead of thinking that you’re being selfish in taking time for you, do it. Do it now. If you haven’t taken quiet time today to just sit and listen to your inner world, go do it. It’s Monday morning and your “to do” list for the week is huge. But nothing, NOTHING is more important than you are. Nothing is too big of a task to solve if you first take the time to tap into your own magnificence. Whether it’s meditation, prayer, reading something inspirational or going for a walk in Nature- Go put your own oxygen mask on first and then step forward to help others. I think you’ll find things lining up for you with such grace and ease- in a way that you couldn’t have planned if you’d tried. It seems backwards that by spending time for ourselves we’ll actually have MORE time later, but that’s just how it works. Both Mother Teresa and Pope John Paul did it for a reason, and it certainly wasn’t because they were selfish or lazy.

Welcome to the best Monday you’ve ever known and to a productive week overflowing with possibility. The choice is yours. I invite you to go connect now.