Adversity is the number one thing that kills plans for success. At first glance, many opportunities in life can initially appear as adversity. Sometimes, the only thing that makes the difference between whether it’s an opportunity or an obstacle is our individual perception. Every obstacle presents a great opportunity- when we look for it and find it.

Think of it this way. Walking directly into a 30-knot wind can be a difficult thing when you’re trying to get from point A to point B as quickly as possible. The resistance alone can cause us to work harder, become frustrated, wait until the wind dies down or give up completely. Yet,  there is great power and energy in the force of a storm. What if we could find a way to use that to our benefit?

A sailor or a kite boarder doesn’t look at the wind as adversity, but rather, finds a way to use the power of the wind to his or her advantage. Instead of focusing on what they don’t have (a motor, the wind blowing in the right direction, etc), they focus on what they DO have and find a way to utilize that to their advantage- even if it originally is perceived as adversity. 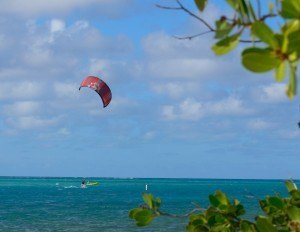 What if we learned to harness the power of the wind instead of seeing it as adversity? What if when something that we initially perceived as adversity showed up in our lives, we were able to take a step back, and ask, “How can I harness this to my advantage?”, instead of seeing it as a roadblock? That small shift alone can create the possibility for phenomenal success.

Instead of wishing that the wind would go away or waiting until it dies down, find the courage to step into the wind of adversity and utilize it’s power to move you where you want to be. Focus on what you DO have instead of what you don’t. Set your sails and harness the power and energy of your current situation- especially that which you might have originally defined as adversity.  Allow the redirection of that energy to propel you forward rather than stop you in your tracks.